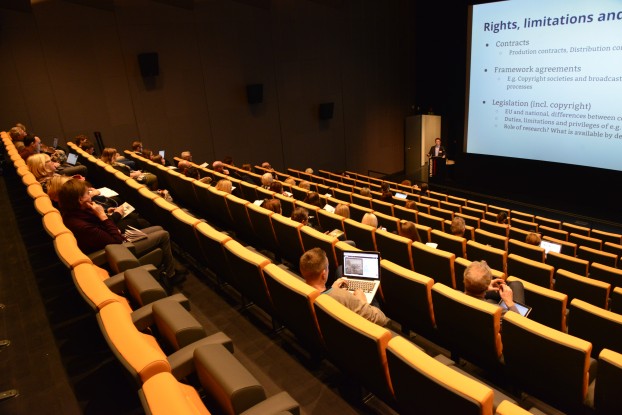 We had this year’s conference in the Estonian Film Museum in Tallinn. The Film Museum has a brand new building (opened in October 2017) in the park of the Maarjamäe Palace. The venue and its exhibition were quite modern. About 70 people altogether got together for these three autumnal days in foggy Tallinn.

The conference was opened with the welcoming speeches from the director of the Estonian History Museum Peeter Mauer and the head of the Film Museum and BAAC’s president Maria Mang. We heard about the history of the Maarjamäe palace and this year’s conference’s theme “Visible and Usable Audiovisual Heritage: Today’s Challenges”.

The first keynote speaker was Sandra Fauconnier from the Wikimedia Foundation. She talked about the work that the foundation does on the heritage sector and what GLAM organizations can do with Wikimedia commons. We also learned that there is a lot more to Wikipedia than you would think, even if you think you know it quite well. Wikimedia has done a lot of work in recent years to structure their data as open linked data. Because of that work you can make wikidata queries to get, for example, all composers who were born in Estonia, Lithuania or Latvia and live(d) in North America – but to do that you have to know SPARQL better than I do.

The second keynote speaker was Tom Crane from Digirati Limited, UK. He talked about the IIIF framework and extending it to time-based media. IIIF comes from “International Image Interoperability Framework”, which explains what it is quite well. We saw what you can do with IIIF, there was an example where images had been cut out of an old manuscript, and the manuscript and the images were held in different museums. Both used IIIF which allowed the user, using and IIIF compatible viewer, to view the book as whole. The viewer fetched the images from two different servers and combined the image for the user. You can also make commentary layers to images hosted by others without altering the original image. Now this framework has been extended to video and audio by adding time dimension. It seems this technology is not completely unlike the one used to deliver subtitles on digital TV.

After lunch it was time for presentations. First was Michaela Snopková from the Estonian Institute of Historical Memory. She talked about Kogu Me Lugu project (Collect Our Story), which collects memories of people who have fled from or lived under the Soviet or German occupation in Estonia. They are collected in the form of video interviews. The material is available online. Then Annika Loor and Kaisa Norak from Tallinn University (digital humanities) and Hagi Šein from Estonian Film Database presented their big data analysis of Estonian Film Database. Their analysis of the Film database was done as a coursework for digital humanities. The methods of the analysis allowed to get, for example, the gender distribution of actors on Estonian films and how it has changed over the whole 106 years of Estonian film industry. Katja Hilska-Keinänen from Yle Archive (the Finnish Broadcasting Company) talked about audience involvement on publishing old radio and TV dramas. Yle has published thousands of hours of well-known radio dramas online and they have engaged the fanbase of such dramas in selecting what to publish and finding lost programs. The first session was concluded by Filip Šir and Anthony Allen from the National Museum of the Czech Republic. They talked about the New Phonograph project, which is a national project aimed for preserving mechanical audio carrier collections across Czech Republic.

After coffee Helen Põldmäe from the National Library of Estonia talked about the magnificent tradition of song festivals in Estonia. The song festival of 2019 will celebrate 150 years since the first one was held in Tartu in 1869. We saw all kinds of AV materials that have been preserved from the song festivals in National Library’s collections. Next Jakub Jiřiště had a presentation titled “The constructive use of audiovisual archives in the NaFilM interactive exhibitions”. We got a glimpse of very innovative and interactive exhibition solutions in the Film Museum NaFilM in Prague. Maija Zvejniece and Zane Grosa from the National Library of Latvia shared the results of work they had done to promote their AV reading room and discussed the audience composition. When their work begun 2/3 of their visitors didn’t know about their reading room and only a third of the reading room’s visitors were students and researchers. The session was concluded by Linda Pleša from the National Archives of Latvia who demonstrated the new modules (photo and sound documents) of State Archive of Audiovisual Documents’ website.

After previous evening’s party and afterparty all BAAC members rose (shiny or not) to the BAAC general meeting at 9 am. Then the third keynote speaker, Professor Indrek Ibrus from Tallinn University talked about the evolution of AV metadata standards. They have a research project currently on its third year about the evolution of digital audio-visual heritage metadata systems. Prof. Ibrus described the standards as “compromises between battling organizations”. Lauri Saarikoski from Yle, the Finnish Broadcasting Company, presented the MeMAD project which aims to develop automation for AV content identification and description. This highly technical EU project deals with things like automatic speech recognition for subtitling, image recognition (identifying people on video), automatic structural analysis etc. Copyright was one issue that was discussed in many presentations this year, and this presentation was no exception since data mining also requires licenses from copyright holders. Joanna Kaliszewska from the Polish National Film Archive – Audiovisual Institute (which hosted the last year’s BAAC conference) described the process of selecting and implementing a metadata standard in an archive resulting of merging two organizations. Their solution was to implement the standard (EN 15907) but supply it with elements from other standards, i.e. mix their own schema from the available standards.

After lunch Pekka Gronow from Finland shared his experiences on accessing archival content from abroad. He has recently studied Latvian popular music from the 1980’s and for this research he needed a lot of archival content from different GLAM organizations in Latvia. He noted that while inter library loan system works quite well on books, it can be quite hard to get access to sound recordings or some periodicals. Also, the closedness of radio and tv archives is a universal problem as most broadcasters’ archives are not available for searching online, and this problem should be addressed. After all, most library catalogues, regardless of their circulation or access policy, are available online for searching. Then Jurga Gradauskaitė from iLaw, Lithuania talked about labelling cultural heritage objects with copyright labels. This was a practical apporoach and we also got to see a labeling tool they had made for selecting the right CC label (unfortunately it’s only available in Lithuanian and for Lithuanian copyright laws). Gregory Markus from the Netherlands Institute for Sound and Vision and Jolė Stimbirytė from the Lithuanian Central State Archive presented their RE:VIVE project in which electronic music artists worked with historical recordings to create new music and share it online. In BAAC conference in Vilnius 2016 we already heard an example of this as we got to see and hear the Irish electronic music duo Lakker compose a new piece of music from sounds from archival recordings for this project.

The final session started with Vahur Puik from the Estonian Photographic Heritage Society described translating the FADGI (US Federal Agencies Digital Guidelines Initiative) guidelines for digitization of still images. The presentation confirmed my feeling that there is a lot more to “scanning” than meets the eye, if one intends to do it properly. It’s typical for standards to cost hundreds of euros and be copyrighted (as a librarian RDA comes to mind) but the FADGI guidelines are available for free and are released with CC licenses! Santa Idere-Bankava from Latvia State Archive of Audiovisual Documents described their film digitization work. Some of the films are also meticulously restored. Iva Horová from the National Technical Library (Czech Republic) presented their solution for the lack of Czech national phonoteque: the Virtual National Phonoteque. In addition to serving as a search tool, it is an access point to listening to the catalogue of Supraphon record company. Presentations were concluded by Rene Mäe from the National Library of Estonia, who described some downsides to digitalization of libraries and called for more slowness to the library world. Libraries should be slow places in the fast-paced world!

The day ended with a film screening. We saw the documentary “Ahto. Chasing a dream” by Jaanis Valk (2018). It was about Ahto Valter, an Estonian adventurer who sailed around the world in 1938-40. It took Mr. Valk nine years to make the film, and no wonder: the film is full of undoubtable hard to find archival footage about Ahto’s life before and during the voyage, newsreels about his several Atlantic crossings, a lot of film from journey round the world (Kodak gave their group plenty of film stock for the voyage) and such. A fine example of reusing archival AV content for creating new stories. The director Jaanis Valk was present for the screening, but unfortunately, I had to hurry to the harbor and I could not stay for the discussion after the film.

There were also professional visits on Friday, November 9, to Film Archive of the National Archives of Estonia, Kanut conservation and digitation centre, Estonian Public Broadcasting and National Library of Estonia. I was already home by then, so I don’t have much to say about them.

The next BAAC conference in Autumn 2019 will be held in Latvia. I hope to see you there!