RE:VIVE project – a new way to hear our past 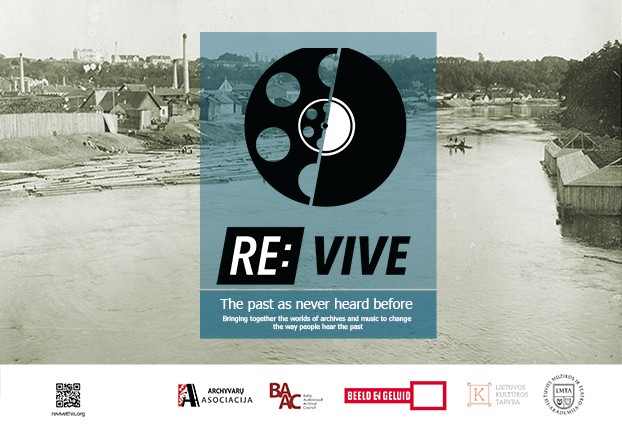 During last few years we have been noticing that more and more audiovisual content become digital and is published online. Vast selection of websites developed by audiovisual memory institutions provides opportunity to people watch films, listen to sound recordings or navigate through historical photo material. However, quite often we can notice that digitized objects of cultural heritage remains only in some Internet databases. Audience doesn’t access these databases frequently, so digitized content is simply forgotten. That’s why it is so important to spread digitized culture heritage to different audiences in the more understandable way, thus encouraging more diverse re-use of it. Memory institutions from various countries initiate number of projects facilitating reuse of cultural heritage. One of such successful projects – RE:VIVE, initiated almost 3 years ago by the Netherland Institute for Sound and Vision. RE:VIVE brings together the worlds of electronic music and archives to change the way we hear our past. RE:VIVE works by partnering with artists, festivals, record labels and educators to use culture heritage as a creative catalyst. Digitized heritage material is of the same importance as the new work itself. RE:VIVE puts the collection first, ensuring pure re-use of heritage material. RE:VIVE initiative works in three directions. Firstly and most profoundly are releases. Releases take a curated set of archival material and invite a musician to, only by re-sampling the sound provided, create a new musical works that is inspired by the respective curatorial theme. This new musical work is then released digitally (put on the Internet) and physically (more often on vinyl discs). One of the successful examples is Irish techno duo Lakker 2016 album “Struggle&Emerge”. The album focuses entirely on the Netherlands’ relationship with water. The second direction is the creation of music for old archival films. RE:VIVE invites electronic musicians interested in composing for moving image to test and develop their skills in writing music for archival films. These films are then shown at different cinemas in the Netherlands. It is a very easy way of both allowing heritage to inspire new creative works while simultaneously giving the archival films a second life and new audiences. RE:VIVE also holds workshops for students and musicians of all ages where they can learn about sampling, remixing, sound design, etc. They also have the possibility to create something new using archival sounds and films. These workshops help get new audiences and young creatives get interested in archival material, thus showing that archives and culture heritage can also be very inspiring. In summary, RE:VIVE encourage the international cooperation between creators, publishers, memory and culture institutions, and audience. Music is used as a tool to spread heritage information despite countries boundaries and geographical obstacles.

At the beginning of 2018 the Archivists Association of Lithuania has received a grant from Lithuanian Culture Council for RE:VIVE project in Lithuania. The project has been implemented with the partners – Lithuania Academy of Music and Theatre, the Netherlands Institute for Sound and Vision, and Baltic Audiovisual Archival Council. The main target of the project is to support international and interinstitutional cooperation in the field of re-use of digitized cultural heritage while creating an album of electronic music. RE:VIVE project is very important and relevant as it describes different and new possibilities for re-use of digitized sound heritage kept at memory institutions. This is a new initiative in Lithuanian context and it serves as a an encouraging success story revealing potential of creative raw material available at Lithuanian memory institutions for creators.

For RE:VIVE in Lithuania it was decided to select and use Lithuanian folk music recordings stored in the Ethnomusicology Department of Lithuanian Academy of Music and Theatre. Here you can find one of the largest archive of folk music recordings not only in Lithuania, but also in Europe. The specifics of the archive – comprehensive capture of musical folklore, which includes songs, threnodies, psalms, fairy-tales with song inserts, instrumental music and so on. Every year the archive grows as there are 2 or 3 folklore expeditions as well as shorter visits to different regions of Lithuania organized. The archive of musical folklore has been collected since 1950. By now there are about 100 000 items of sound recording (about 1420 hours).

On May 23-27th, 2018 the creator of electronic music album Joshua Sabin from Scotland and Gregory Joseph Markus from the Netherlands Institute for Sound and Vision have been visiting Lithuania. They have visited the folklore archive of Lithuanian Academy of Music and Theatre, where they have been introduced to various activities of the archive and recordings of musical folklore. During the meetings with ethnomusicologists, Joshua Sabin and Gregory Joseph Markus were interested in the origins of Lithuanian folklore, relations with folklore of other countries, differences between various ethnographic regions of Lithuania. Furthemore, they have been visiting the events of folklore festival “Skamba skamba kankliai”, where they could directly see and listen to folklore bands and performers from different ethnographic regions of Lithuania. Tours were organized to Rumšiškės ethnographic open-air museum and to the former capital of Lithuania, Kernavė, organized. These activities have also contributed to the inspiration for music creator as well as to successful implementation of the project.

In order to encourage the dissemination of RE:VIVE project results among younger generation, it was decided not to use common ways for distribution of new music, but publish it on the Internet: http://www.baacouncil.org/revive/. The project and its results have been presented to specialists of memory institutions during some professional events – meeting of members of Archivists Association in October in Vilnius, annual international conference of Baltic Audiovisual Archival Council in November in Tallinn, RE:VIVE project presentation at  Folklore Archive of Lithuanian Academy of Music and Theatre in November in Vilnius. Information about the project and it’s results is also published in the Internet websites and social media channels of project partners.

Dissemination of RE:VIVE project results doesn’t end with the official end of the project. Project partners are going to disseminate the project and electronic music album on voluntarily basis in the future both in between various audience groups (during music festivals in Lithuania and abroad), music communities (by organizing meetings and presentations) as well as for specialists of memory institutions (during national and international workshops and conferences).