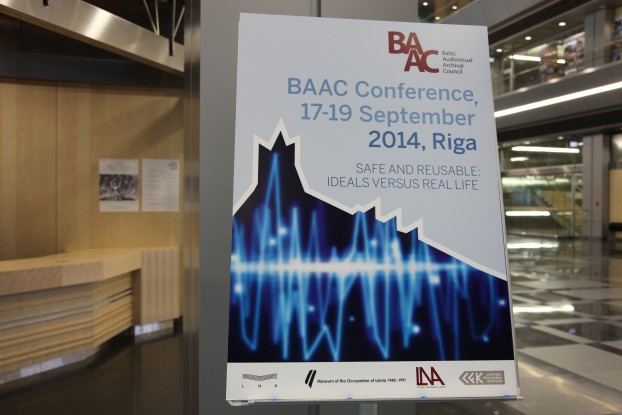 The new building of the National Library of Latvia in Riga was the venue for the annual conference of BAAC. Delegates from Estonia, Latvia, Lithuania, Canada, Norway, Finland, United Kingdom, Sweden, Denmark , Poland, France, Italy and Malta came to the beautiful, old city of Riga, to exchange information and to learn about the work of different audiovisual archives. The programme title was ambitious: “Safe and reusable: ideals versus real life”.

Aldis Putelis, Dr. Nijole Bliudziuviene, Helle Bech Madsen, Marika Koha, Gerli Rebane, Heiki Mannik, Tedd Urnes, Ginta Zalcmane, Sven Lepa, Juris Lubejs, Klaus AJ Riederer, Nicole Jacquemin, Maksims Misura, Marco Rendina, Janis Ziedins, Richard Ranft, Maria Drabczyk, Kamila Lewandowska, Eve-Marie Oesterlen, Jole Stimbiryte, Erkki Nurmi and Adris Kesteris contributed to make the conference an interesting and informative event for all of us who are searching for new information and education in the field of development of audiovisual archives.
The conference was officially opened on September 17 by the President of BAAC, Zane Grosa, and the Director of the National Library of Latvia, Andris Vilks. The conference was supported by the Front Porch Digital, France, Embassy of Canada, Embassy of Norway, and the Ministry of Culture of Republic of Latvia.

The first speaker of Session 1 was Aldis Putelis. He works for the Archives of Latvian Folklore, Institute of Literature, Folklore and Art, University of Latvia. Recordings of old folk music from Latvia and issues in connection with preservation of folk-melodies were subjects for his presentation.
Issues of formation, preservation and access of the essential part of the National Archival Fund of published documents were dealt with by Dr. Nijole Bliudziuviene. We moved from archival matters of Latvia to issues of published documents in Lithuania. Dr. Nijole Bliudziuviene is Director of Centre of Bibliography and Book Science at the National Library of Lithuania.

From Lithuania we moved to Denmark. Helle Bech Madsen from the Danish Broadcasting Corporation (DR) informed us about the development of digitisation at the DR. Digitised content of the collections must not remain in the archive. Journalists and programme makers in-house must get easy access to the audiovisual collections. An important questioned asked by Hell Bech Madsen was - how can archives stimulate the use of the content?

The last presenter of Session 1 was Marika Koha from Estonia. She reported about the work with Estonian audio cassettes and digital archive Digar at the National Library of Estonia (NLE). About 2100 commercially published audio cassettes related to Estonia are stored in NLE. The digitisation of the cassettes was launched at the beginning of 2009. From 2013 sound files of digitized audio cassettes are put into Digar, the new digital archive.
Archival issues from Latvia, Lithuania, Denmark and Estonia were presented at the first session.

Estonian Public Broadcasting has dealt with complicated issues connected to the digitisation of the audiovisual collections of the broadcasting. Heiki Mannik talked about theoretical and practical problems with the introduction of the digitisation policy of the company.
The last presenter of Session 2 was Tedd Urnes from Norway (TAAM). Safeguarding, protection of analogue originals of audiovisual archives, libraries and private collections in time of war, natural disasters and political conflicts were issues dealt with in his paper. Protection of cultural heritage of any nation during an armed conflict was also dealt with in his paper.

The programme of the last session of the first day of the conference was to highlight issues of importance to national libraries of Latvia and Estonia.
The search for the “lost Latvia” was dealt with by Ginta Zalcmane from the National Library of Latvia (NLL). The project “In Search of Lost Latvia” is defined as a historical-cultural project which is implemented by the digital library of NLL, it contains old photos, postcards, drawings, depicting places and objects in Latvia which no longer exist. The content description of the objects can be made by the users of the project in close cooperation with the National Library of Latvia. The aim of the project is to make a bridge between past and present.

National Archives of Estonia was the subject for the next presenter Sven Lepa who is also interested in making historical images accessible for a larger audience. In 2008 the image hosting site “Flickr“ started cooperation with the Library of Congress, USA, to bring historical images to users. The National Archives of Estonia became a member of “The Flickr Commons“ in 2013. This means that the library has contact with about 80 participating institutions worldwide. Sven Lepa presented a report of the experience with “The Flickr Commons” and the cooperation with different international institutions worldwide.

The last presentation of Session 3 was left to Juris Lubejs who is working as an audio engineer at the National Library of Latvia.
He presented a report of his studies of the Latvian record company “Bellaccord Electro“. The presentation highlighted some aspects of the importance and success of the Latvian businessman Herberts Rudzitis, founder of the company. A brief history of the prewar work to set up a record industry is Latvia was also presented. The work with digitisation of the Bellaccord records at NLL was also included in the presentation.
An opening reception for all the delegates was at “Small Guild (Maza Gilde)” in the evening, which included a splendid performance of a Latvian men’s choir. One of the singers was a member of BAAC, Aldis Putelis.

On September 18 - the second day of the conference - Klaus A J Riederer from Finland opened the Session 4. “Seeing is believing: How to make OCR work in practice” was the title of his paper. His main issue was how to deal with old card catalogues. What to do with the content of the cards? How to scan the index cards into databases? The content of the card was controlled before the scanning began. Optical character recognition (OCR) was demonstrated in action.

Information about how to transport, store and protect the content of the collections, was the main issue of the paper presented by Nicole Jacquemin, a representative for the company Front Porch Digital, France. The Archive Exchange Format (AXF) is the key tool to several cloud-based services available today proving its significance outside of archive applications.
Finland and France – then we return to information from Latvia.

Latvia State Archive of Audiovisual documents, Electronic documents department presented a paper written and presented by Maksims Misura. What to do with old tapes which are fading? Audio tapes can be lost because ferromagnetic layer has started to separate from the tape substrate. The paper dealt with the issue how the archive may save national documentary heritage by copying the information to the new digital media.
The last speaker of Session 4 came from Italy. Marco Rendina presented a paper dealing with the Prest4U project. It is difficult for the great majority of media owners to gain access to advanced audiovisual preservation technologies. Presto4U will focus research efforts onto useful technological solutions, raise awareness and improve the adoption of audiovisual preservation research results.

Janis Ziedins opened Session 5 by presenting a paper aiming at finding a solution for online access of audiovisual material. What about making it possible to watch movies in any public library free of charge? Culture Information Systems Centre in cooperation with other cultural institutions has built Latvian movies portal (www.filmas.Lv) where users can get access to movies.

Richard Ranft is the Head of Sound & Vision at the British Library. He was stating that: “... Many of Europe’s leading cultural heritage institutions have large, high-quality audio collections which are in great demand by researchers and the general public, but online access to them is constrained by copyright and fragmented among many different platforms...”. The problem will be solved because the Europeana Sounds project (europeanasounds.eu) is aiming at bringing together for the first time major European audio archives and web innovators to solve the problem. Publishers, the record industry, rights holders and cultural heritage institutions will be approached to improve the access to out-of-commerce and geo–locked audio content.

The last contribution to Session 5 was done by Maria Drabczyk, Kamila Lewandowska and Eve-Marie Oesterlen. The title of the paper is: Going EUscreen XL: On the joys and challenges of participating in a pan-European heritage project. The focus of the presentation was on the practical challenges and benefits of working with many partners, making audiovisual content and metadata searchable, findable, and accessible for future re-use. The presenters came from the National Audiovisual Institute of Poland and British Universities Film & Video Council.

The final session of the conference, Session 6, was opened by a presentation from Jole Stimbiryte. She was making a report about her experience working with the users who are searching for access to audiovisual material held at the Lithuanian Central State Archive. The questions were: Does the user always get what he wants? Is every audiovisual material accessible for the user at any time? What about material that is protected by copyright regulations?

The next speaker came from Finland: Erkki Nurmi from the University of Arts Helsinki, Sibelius Academy Library. He was reporting about his study tour to libraries in London. He focused on the use of e-resources in academic music libraries. The last presentation of Session 6 was left to Andris Kesteris from Canada. He gave some background information about the documentary film which he had worked on for about three years. The film’s title: “Outside the Sphere“. Marcus Kolga and Andris Kesteris produced the 47- minute film in collaboration with the Independent Producers Initiative program of OMI-TV in Toronto, Canada. The film relies on archival and new footage coming from various institutional and community sources. The content of the film is the history of the Baltic communities in Canada and their role in a post-Second World War environment. The main question posed in the film is about the future of the Baltic diaspora and the survival of the three Baltic States themselves. 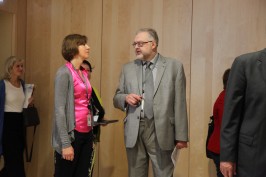 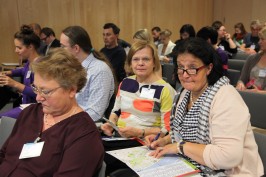 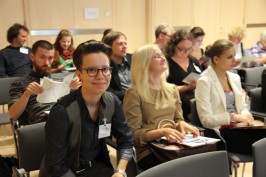 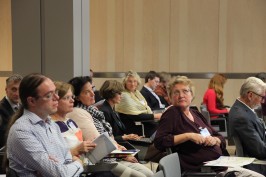 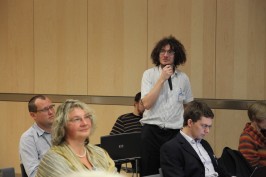 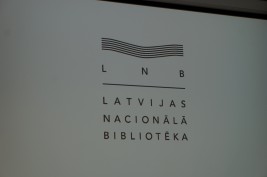 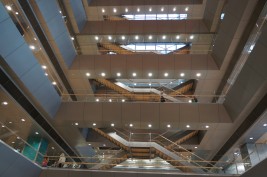 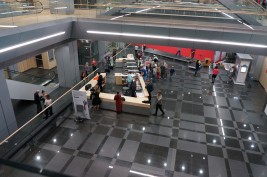 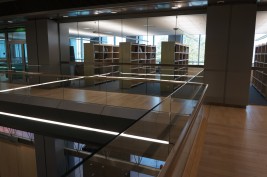 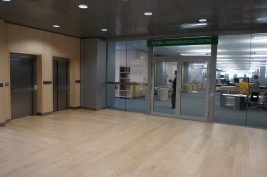 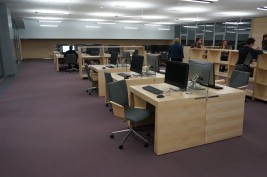 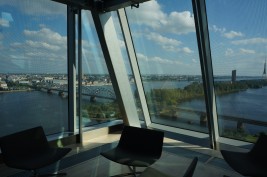